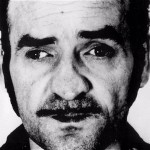 Fritz Honka was a German serial killer who murdered four whores from Hamburg’s red light area, keeping the dead bodies in his apartment. In 1975, firefighters found the preserved remains after a fire in the house. Honka was not present at that time because he was at his duty as night gatekeeper. He was captured when he returned home and sentenced to life in prison. After being arrested in 1975, Honka said that he murdered the ladies after they ridiculed his inclination for oral s*x over “straight” i*********e. In 1993, Honka set free from jail and spent his last years in a nursing home. In 1998, he died in the hospital of Langenhorn, Hamburg.