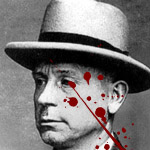 A.K.A.: “The Vampire of Dusseldorf”
Number of victims: 9
Murder Method: Strangulation/Stabbing with knife/Hitting with a hammer
Country: Prussia Rhine Province, Germany

German serial killer, Peter Kurten named as “The Vampire of Dusseldorf”, carried out a series of s*x violations, murders and assaults between February and November in 1929. His victims were adults and children. He was known as the vampire because he drank the blood of a murdered swan and likewise, he made endeavors to drink the blood of some of his victims. In 1931, he was executed by guillotine in Cologne.