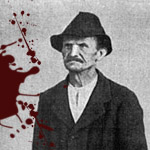 George Karl Grossmann (Carl Fredrick Wilhelm Grobmann) was a German serial killer who tore up his victims. In 1921, he was captured at his flat when neighbors heard shouting and slamming commotions. When police arrived, they found the dead body of a young lady on the bed that had been killed recently.  Grossmann was taken into authority and accused of first-degree murder. During World War I, Grossmann sold meat on the black market and it is believed that the meat contained the remaining parts of his victims. Karl Grossmann was convicted of murder and sentenced to death. Prior to his sentence could be completed; he hanged himself in his own cell in 1922. The actual number of lives is not known that Grossmann took.