While the internet provides us with easy access to information and many hours of cat videos, it definitely has a dark side such as Hiroshi Maeue. For example, depressed Japanese citizens afraid to die alone use the web to form suicide pacts. After finding partners online, they meet up and kill themselves. It’s a disturbing trend, and these troubled people are perfect targets for monsters like Hiroshi Maeue. 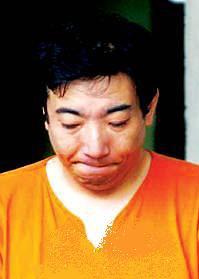 Hiroshi Maeue suffered from paraphillic psychosexual disorder, meaning he could only get off by hurting people.

This pervert’s preferred method of sexual gratification was asphyxiating others. Between 1988 and 2005, Maeue tried to strangle five people, but only received light sentences for two of the attacks. Those first few attempts were only practice though. When the internet suicide pacts grew in popularity, Maeue started hunting online.

His first victim was 25-year-old Michiko Nagamoto. Hiroshi Maeue sent her multiple emails encouraging her to commit suicide with him. He even suggested they sit in his car and breathe in fumes from burning charcoal. The young woman agreed, but when she met Maeue, he tied her up and held her mouth and nose shut until she died. When asked later why he did it, Maeue responded, “I wanted to watch a face in agony.”

Next, Maeue went after a 14-year-old boy and a college student. Each time, he promised his victim they’d die peacefully together. When they showed up, they were bound and murdered. Afterwards, Maeue hid the bodies in the mountains or near a dam, before returning home to watch recordings of the killings. Fortunately, Maeue was stopped before he could claim more victims, and was executed by hanging in 2009. Strangely, Maeue never appealed his sentence. Perhaps, like his victims, he was ready to end it all.