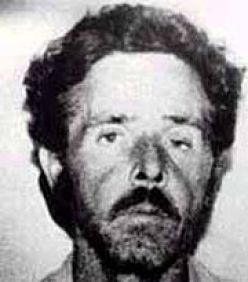 Henry Lee Lucas may have been America’s most prolific serial killer, murdering over 200 people, though Lucas confessed to as many as 600! Authorities have eventually concluded that many of Lucas’ claims were exaggeration and/or references to other peoples’ murders. Be that as it may, from 1960, when Lucasmurdered his mother, to 1983, he and sometimes accomplice Ottis Toole began murdering people just for the thrill of it. When Lucas was finally apprehended he wrote the sheriff: “I killed for the past 10 years and no-one will believe me. I cannot go on doing this. I also killed the only girl I ever loved.” When Lucas’ wife, Frieda Powell, wanted to confess her sins regarding her knowledge of her husband’s murders, Lucas killed her. Many of Lucas’ murders were substantiated because of the establishment in 1982 of the Violent Criminal Apprehension Program, which, among other things, defined serial murder.