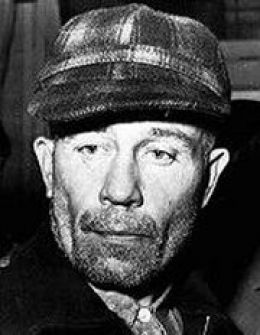 Edward Theodore Gein was a grave robber and murderer whose foul deeds inspired some of the most frightening characters in horror films. Gein was a mama’s boy who also wanted to be a woman. He robbed nearby cemeteries and murdered women for body parts, so he could “dress himself up” to resemble a woman. When the police caught up with Gein, they discovered that his house was a slaughterhouse and morgue, body parts scattered everywhere. Gein’s evil exploits led to the movies Psycho, Deranged,Silence of the Lambs and others. Gein’s ghoulish ways also became part of Mid-West mythology in the middle 1950s. Mothers told their children: “Don’t go down to the river or play on the railroad tracks. Ed Gein will get you.” Gein’s influence on popular culture may be the greatest of the serial killers.