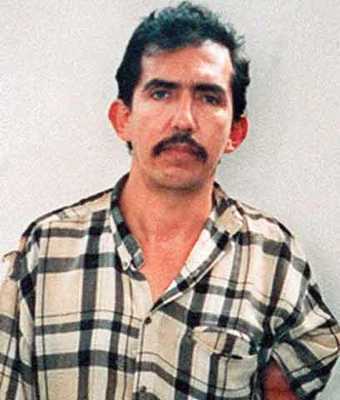 Luis Garavito is not as famous as some of his rivals here on this list, but he is the most prolific serial killer of all time. Born on January 25th, 1957, “La Bestia” is the oldest of seven brothers. His childhood was ruled by his father, subsequently described as both physically and emotionally abusive. Furthermore, during his trial, Garavito described being sexually abused when he was a young boy, but didn’t name the perpetrator.

Further details of his early life are sketchy at best, however, the details surrounding his maniacal killings is frightening. He lured children to trust and accompany him through offers of money for odd jobs, candy or drugs. All of the children were tied up, viciously tortured, raped and were eventually killed by having their throat slashed, and many were decapitated completely.

Garavito has accurately directed police investigators to the graves of more than 170 victims, encompassing large parts of Columbia. Investigators believe that Garavito is responsible for more than 400 deaths during the years prior to his capture.

Garavito was captured on 22 April, 1999. He confessed to murdering 140 children. However, he is still under investigation for the murder of 172 children in more than 59 counties in Colombia. He was found guilty in 138 of the 172 cases; the others are ongoing. The sentences for these 138 cases add to 1,853 years and 9 days. Because of Colombian law restrictions, however, he cannot be imprisoned for more than 30 years. In addition, because he helped the authorities in finding the bodies, his sentence has been decreased to 22 years. Garavito is considered the worst serial killer in history for having a higher death toll than any other.